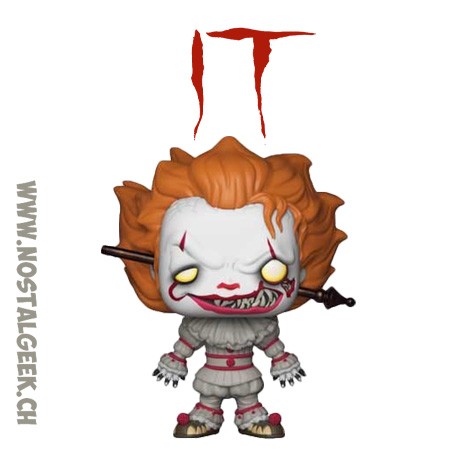 Colourful range of collectible merchandise by Funko. Choose from many different products based on movies, tv-series, games and more!

It, also known as It: Chapter One, is a 2017 American supernatural horror filmdirected by Andy Muschietti, based on the 1986 novel of the same name by Stephen King. The screenplay is by Chase Palmer, Cary Fukunaga and Gary Dauberman.A second installment is planned. The film tells the story of seven children in Derry, Maine, who are terrorized by the eponymous being, only to face their own personal demons in the process. The novel was previously adapted into a 1990 miniseries

In October 1988, stuttering teenager Bill Denbrough gives his seven-year-old brother, Georgie, a paper sailboat. Georgie sails the boat along the rainy streets of small town Derry, and is disappointed when it falls down a storm drain. As he attempts to retrieve it Georgie sees a clown in the sewer, who introduces himself as "Pennywise the Dancing Clown". The clown entices Georgie to come closer, then severs his arm and drags him into the sewer.

The following summer, Bill and his friends (loudmouth Richie Tozier, hypochondriac Eddie Kaspbrak, and timid Stan Uris) run afoul of bully Henry Bowers and his gang. Bill, still haunted by Georgie's disappearance and the resulting neglect from his grief-stricken parents, discovers that his brother's body may have washed up in a marshy wasteland called the Barrens. He recruits his friends to check it out, believing his brother may still be alive.