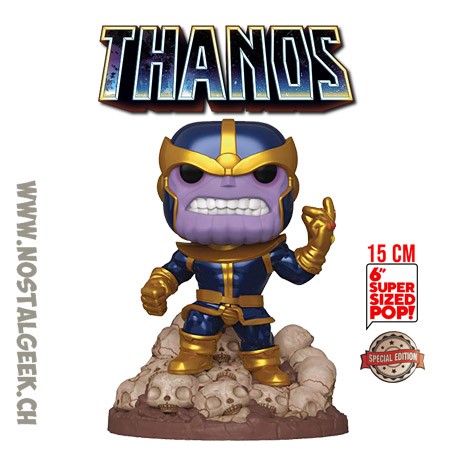 Thanos (UK /ˈθænɒs/, US /ˈθænoʊs/) is a fictional supervillain appearing in American comic books published by Marvel Comics. The character is usually depicted as a Titanian mutant–Eternal superhuman. The character first appeared inIron Man #55 (Feb. 1973) and was created by writer-artist Jim Starlin. Debuting in the Bronze Age of Comic Books, the character has been featured in over four decades of Marvel continuity and a self-titled series.

Thanos appears in the Marvel Cinematic Universe's various films; a cameo during the mid-credits of The Avengers(2012), Josh Brolin portrays the character in Guardians of the Galaxy (2014) and Avengers: Age of Ultron (2015) and will reprise the role in both Avengers: Infinity War (2018) and its untitled sequel (2019). The character has appeared in other Marvel-endorsed products, including animated television series, arcade, and video games.