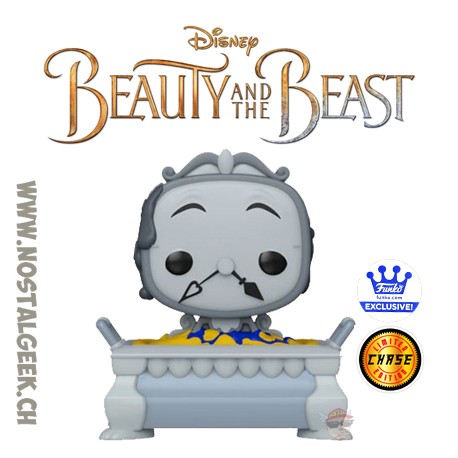 Cogsworth is the Beast's tightly wound and extremely loyal Majordomo, and Lumière's counterpart and rival. When the Enchantress curses the Beast, he is transformed into a pendulum clock. He initially tries to stop the others from allowing Maurice to stay at the castle (as he knows the Beast would not approve), but ultimately gives in. When the Beast arrives, he tries to explain what happened, but the Beast is too angry to hear what happened. He tries to get Belle to come to dinner, but she refuses. When he reports to the Beast her refusal, he tries desperately to calm him down, as well as keep him calm when trying to get her to join him for dinner. He follows the Beast's orders to deny her dinner, but he eventually relents, telling them to at least keep the noise down. He is eventually swept up in the boisterous "Be Our Guest" number. Later he learns that the Beast let Belle go, much to his dismay. He then tells everyone the bad news, and seems resigned to his fate (as the rose is nearing the last petal). When the residents of the castle learn of the upcoming invasion, he tries to come up with a plan to stop the villagers, but the others leave him before he can finish. He later participates in the battle and saves Lumiere from Le Fou by sliding down the banister and prodding Le Fou's rear end with a pair of scissors. He, Lumiere and Mrs. Potts rush to aid the Beast who is fighting against Gaston, but arrive after the battle's end, when the Beast dies from a mortal wound from Gaston, who fell from the West Wing. The spell breaks, however, reviving the Beast and returning Cogsworth and the others to their original forms. In the end, he gets into an argument with Lumiere about who told who about Belle breaking the spell (it was Lumiere).